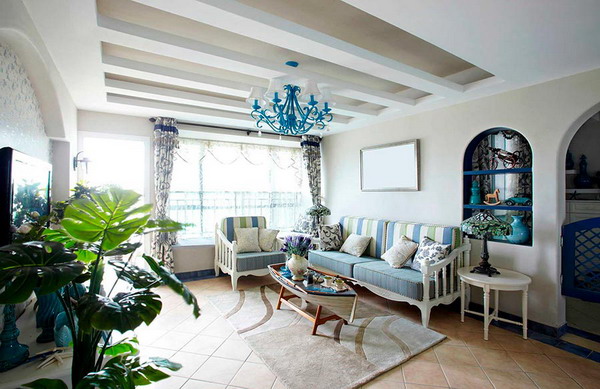 The History Of The Appearance Of Style

In ancient times, there were two powerful states in the Mediterranean region. One of them was inhabited by the Greeks, and the second by the Romans. Athens was the main pearl of Greece. The capital of the Greek state was famous primarily for trade and crafts, and Rome was focused on the conquest of other states. At the same time, there were common features between Greece and the Roman Empire, which consisted in the fact that both states absorbed many of the original features of other states. In this regard, the Mediterranean Sea plays an important role, since important international routes connecting Europe and the countries of Africa and Asia passed through it. Spain, which had a significant trade and military influence in the region, made a great contribution to the development of the Mediterranean culture. Cultural heritage of Greece, Italy, Spain was most strongly influenced by the formation of the Mediterranean style. Its interior is characterized by laconicism, simplicity and convenience. Finding yourself in a room that is made in the Mediterranean style, you will feel the warmth of the sun and the freshness of the green spaces of the Mediterranean.

The Main Features Of The Mediterranean Style And Its Types

Lightness is the main feature of the Mediterranean style, which manifests itself in every detail. In this design style, you will not find the slightest hint of luxury, pretentiousness of the environment, ornate furniture. It is characterized by simplicity, thoughtfulness and practicality. Thanks to these properties, it looks like a classic country. All the beauty that is inherent in the nature of the Mediterranean, with all its life-giving energy, permeates the interior of the room, from the colors to the shapes and ornaments of the environment.

The Mediterranean style is subdivided into several varieties, but each of them is characterized by naturalness, naturalness and “sunshine”, which are inherent in the style as a whole. Its main types are Greek and Italian.

Features Of The Greek Mediterranean Style

The main color solutions in this direction are white, blue, yellow and green. Despite the fact that these paints belong to cold shades, when you find yourself in a room filled with such colors, you will feel the warmth of the Mediterranean sun, which will lift your mood. The Greek style is also called the Cycladic style. It focuses on blue and white stripes with pink inserts in furniture, ceramics, and household items. White, blue and yellow colors create the appearance that you are in the vast sea distance, shrouded in sunlight.

Another important feature of the Cycladic style is the alternation of colors. Even furniture made from a single set can be covered with completely different color shades. However, at the same time, it must be located in a strict order. The style is built in such a way that all surrounding objects and household items look quite strict and neat. At the same time, a person who finds himself in a house where the Greek style reigns will not have the feeling that everything is overly pedantic and orderly.

Sometimes in the Cycladic style you can find blotches of black. At first glance, it seems that he is superfluous here. However, this is a misconception, since a small amount of paraphernalia, made in dark colors, will make your room even more charming, refresh it, and, of course, will only delight the owner of the house.

If we talk about bathrooms, then here blue and white shades and green for ceramic tiles will come in handy. In general, the color variety should be quite modest, but the decor itself should be distinguished by brightness and saturation of tones. In all other respects, you need to adhere to the traditional component, in which there must certainly be a large amount of light, the presence of floral ornaments, as well as that elusive feeling of freshness that is characteristic of this style.

Features Of The Italian Mediterranean Style

The Italian style differs from the Greek in that only light, warm tones are inherent in it, which are achieved using yellow, orange, green, olive, golden and brown colors. If you add brickwork (or its imitation) to these color shades, then an unprecedented feeling of comfort is provided to you.

Various hand-made elements create a special energy. These include, for example, mosaics or paintings on the floor or wall. By creating an intentional roughness, the owner of the house will plunge even more into the element of the Italian Mediterranean style. At the same time, do not forget about furniture, which can be forged or wooden.

It happens that bright tiles, mosaics, brick inserts and various patterns are located in the same room. Do not be afraid that, due to such a heap of accents, the interior of the room will deteriorate. This is by no means the case. On the contrary, this combination will give your room even more originality, and in general the room will look very advantageous.

The finishing touch to the style is the large windows. Their presence is required even in the bathroom. With their help, the room will be filled with natural light and air.

In terms of color, the Mediterranean style is characterized by natural colors. These include both cold (blue, blue, yellow, green, white) and warm shades (olive, brown, emerald, orange-red). Quite often they combine white and blue colors as a component of the decor. We are talking about tile inserts located on the wall, shelves for souvenirs and other small items and accessories.

Laconicism is an important part of the Mediterranean style, so don’t use all the variety of colors! It is enough to choose only 2–3.

In the Greek design direction of the Mediterranean style, white walls are used primarily. They resemble a white sheet of paper on which you can create ornaments with blue and green inserts. The most commonly used material is decorative plaster or paint. Another feature in this direction is the use of wood panels. They are usually painted in light colors to give the overall background of the room the perfect color combination. A person who enters such a room will have the impression that wooden objects were under the scorching sun rays of the Mediterranean, absorbing the life-giving spirit of Greece. The Italian direction is characterized by matte walls with deliberate irregularities. In this regard, stucco is very popular, which is a kind of decorative plaster, which contains particles of lime, marble, gypsum and water. The material looks rough at first glance, but this is just a first impression. In fact, it will favorably set off the surrounding furniture and decor, which will add even more splendor to your interior.

Another no less interesting way to decorate walls is painting, in which several shades of the same spectrum will overlap. This distinctiveness is also part of the Italian Mediterranean style. Thanks to this design, an imitation of the play of light will appear, as well as natural shadows will be created. All this will add even more sophistication and charm to your room.

When designing ceilings, you should adhere to the same principle as when decorating walls, so the ceiling should be discreet and neat. For this, it is best to use paint or plaster, and the color can be green or white and blue. In the Italian style, the best option would be textured plaster in a standard color, which should match the design of the walls.

When decorating ceilings, it is best to use wooden beams. They can be painted or left as they are. Thanks to the beams, the ceiling will not only visually rise, but also decorate your room.

It is best to use furniture made from natural wood in this case. However, as an option, you can also use the one that will be painted “wood-like”. Products made semi-antique or with your own hand from special reed will look great. Yes, they will be quite expensive, but such furniture will definitely bring you a lot of joy. In addition, it is very comfortable for relaxation.

A large amount of furniture is made in Mediterranean style. These are various forged chairs, tables, tabletops of which are made of ceramic tiles, wooden benches, dressers, rocking chairs, vases and other pieces of furniture.

A characteristic feature of the Mediterranean style is the minimal use of items made from textiles. Instead, roller shutters or blinds of light shades are used. The bedroom and kitchen are few places where there is a place for textiles. If we talk about bedspreads, tablecloths and carpets, they are mostly made from linen and cotton.

Lighting is considered to play a big role in Mediterranean style, so pay special attention to it. In this regard, it is possible to purchase lamps that will hang from the wooden beams located on the ceiling.

You will also like various types of floor and wall lamps. It is a good idea to use LED strips that can be positioned around the entire perimeter of the ceiling. They will serve as an additional light source for other lighting fixtures. As a result, the room will be better illuminated. At night, LED strips can be used as a night light.

Various objects of art can be used as decor for rooms. For example, paintings with a marine theme, decorative plates, figurines.

Don’t be afraid to experiment! So, African and Turkish Mediterranean motifs, with a reasonable ratio, will only decorate the room and bring originality to the Greek-Italian direction.